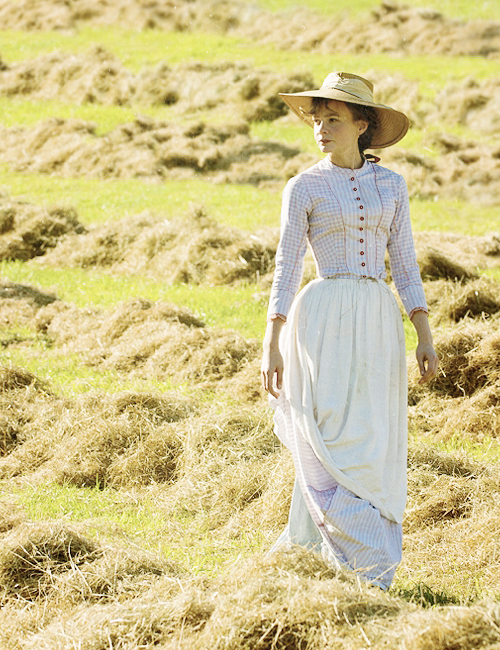 I’m starting to become quite the Hardy fan now, having read and loved The Return of the Native and Tess of the D’Urbervilles in the last year or so. I’m going to pretend, however, that my desire to read this particular book wasn’t fuelled by a certain upcoming film adaptation starring Carey Mulligan, and a particular penchant for all costume dramas ever. No, not at all.

(On a completely unrelated side note, I love how dramatic they have made the film trailer look. It’s canonical nineteenth century lit, we know that there’s not that much action in it. Stop trying to trick us.)

I’ve spoken before about how much I get on with Hardy’s writing style, although I have to admit that I found this one a little harder to get into – probably something to do with all the farming and agricultural descriptions. FARMING, SO MUCH FARMING. But I suppose with a title like Far from the Madding Crowd I should probably have anticipated such a countrified setting, and Hardy does rural life just so well:

“…but love, life, everything human, seemed small and trifling in such close juxtaposition with an infuriated universe.”

Just like Eustacia Vye and Tess Durbeyfield, Bathsheba Everden (what a name) is a great female protagonist, torn between three different men who each love her differently and who can each give her something different. I guessed, or rather hoped for, the ending and was pleased to be presented with a rare Hardy happy(ish) ending. I’m not ashamed to admit that I even shed a lonesome tear at the last chapter or two, particularly at the beautiful line:

“And quite right too,” said Oak. “I’ve danced at your skittish heels, my beautiful Batsheba, for many a long mile, and many a long day; and it is hard to begrudge me this one visit.”

Oh god, I’m getting a little teary just copying this out. What a wonderful and fitting ending to a story which reminds you that sometimes it’s those who you push away, the quiet ones who you overlook, who are the ones most important, the ones most capable of love. Gabriel Oak was by far the most likeable character, and I was rather grateful to Hardy for giving him the happiness he deserved.

It wasn’t the favourite Hardy novel that I’ve read so far, but Far from the Madding Crowd is another beautiful portrait of English rural life with a great (if not at times annoying) heroine who struggles to express herself in a world not made for her kind.

“It is difficult for a woman to define her feelings in language which is chiefly made by men to express theirs.”

Like Loading...
Tags: Books, Far from the Madding Crowd, literature, Review, Tess of the d'Urbervilles, The Return of the Native, Thomas Hardy
Follow Forever on a Lilo on WordPress.com

← 24 Hours in Bamberg
5 Problems All Writers Will Know →