Review Book #1 : The Fault in Our Stars, John Green

“I fell in love the way you fall asleep: slowly, then all at once.”

Despite the tumor-shrinking medical miracle that has bought her a few years, Hazel has never been anything but terminal, her final chapter inscribed upon diagnosis. But when a gorgeous plot twist named Augustus Waters suddenly appears at Cancer Kid Support Group, Hazel’s story is about to be completely rewritten.

I did something I hadn’t done for ages yesterday: I read a book in one day. And it felt good. It arrived in the post early morning and I proceeded to settle down and read, putting it down only for sustenance and occasional breaks from the emotional trauma of reading about young people dying of cancer. Because this book is sad, and I mean really sad. Cancer is never an easy topic to write about and John Green allows his characters the grace to resist the urge to wallow in their own self-pity, instead portraying the lives of people able to find humour and irony in their situation. Because as well as being sad, the book is also funny, the wit of Hazel and Augustus refreshing and genuinely entertaining and allowing the book to rise up from heartbreak to humour.

There’s nothing better than being absorbed into a story and its characters, and Green’s easy writing style was a nice change from the period literature I’ve been studying. In particular, he really captured the essence of Amsterdam and although I’ve never been, I really felt like I knew the city from his writing. It was no surprise to find out that he’d lived there for a couple of months while writing the book and his evocative descriptions of the city’s atmosphere has definitely made it my favourite part. I only cried once throughout and it was at the bit in the Anne Frank Museum (sorry to give anything away) where they kiss and everyone applauds. There’s something so beautiful about the image of two ill people showing their love at such a significant place. Their defiance in both the face of oppression and their illnesses really got to me, plus I’m a sucker for soppy parts.

I don’t want to give too much else away for those who haven’t read it, but I’d definitely recommend this book for all ages and fans of all genres. It’s less about cancer and dying than it is about life and living. I’ve always loved the Julius Caesar quote in the title and Peter Van Houten’s philosophically self-gratuitous letters were another one of my favourite parts:

‘Were she better or you sicker, then the stars would not be so terrible crossed, but it is the nature of stars to cross, and never was Shakespeare more wrong than when he had Cassius note, “The fault, dear Brutus, is not in our stars / But in ourselves.” Easy enough to say when you’re a Roman nobleman (or Shakespeare!), but there is no shortage of fault to be found amid our stars’

Mixing together this idea from Julius Caesar and the ‘star-crossed lovers’ from Romeo and Juliet really embodies the tragedy and fate of the book, something inevitable but nonetheless beautiful. I feel that I should have predicted the way the book ends earlier on, but the thing about being sucked so deeply into a book is that there is no thinking about the future, just the present. A devastatingly beautiful book from an author I am admiring more with every read, and one that’s definitely worthy of its success. 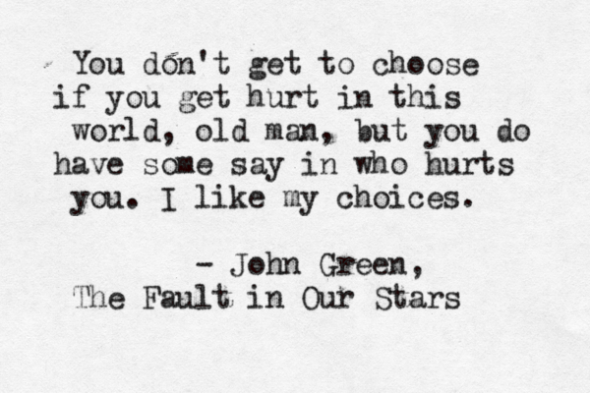 ← 7 Books I’m Going to Read This Year*
Poem of the Week: Jacklight by Louise Erdrich →