“Working in New York one hot summer, Esther Greenwood is on the brink of her future. Yet she is also on the edge of a darkness that makes her world increasingly unreal. In this vivid and unforgettable novel, Esther’s vision of the world shimmers and shifts: day-to-day New York living, her crazed men-friends, and hot dinner dances…”

Ok, so I’m a little ashamed to admit how long it’s taken me to read this book. And that’s a long time.

The problem was that I hadn’t anticipated just how depressing it was going to be (silly me, the signs were all there) and so it got to a point where I couldn’t read more than a couple of pages without putting it down in a melancholy trance. I finally got my act together the other day, however, and plucked up the spirits to finish off the last 50 pages. Here’s what I think about it:

I can’t deny that I enjoyed this book overall, despite the relief I felt when finally finishing it. It felt like I was getting a weight off my shoulders, but that didn’t mean that I didn’t like having the weight there in the first place. Does that make sense? Anyway, I really like Plath’s writing style; it’s simple and flows nicely so I didn’t have to concentrate too hard (which is always nice for someone with a terrible concentration span). However, I thought much more of the book was going to be based in New York so I was surprised and disappointed when that section ended quite abruptly. I felt like the opening bit in New York was exciting and exhilarating whereas when she returns back to her small town, it’s a lot duller and more stifled, although in many ways I suppose that is the point. The blurb is a bit misleading about this, making it seem like the entire book takes place in glamorous New York, and the new book cover featuring a glamorous woman getting ready in the mirror has also caused a bit of controversy for glorifying what is essentially a book about descent into mental deterioration. Knowing Plath’s infamous life story and enjoying her poetry, I can’t help but feel like this modern classic is a mirror into her own state of mind, especially since she committed suicide just a month after its publication, and it adds a kind of twisted beauty to the novel. Esther and Plath’s stories are so interwoven that it becomes impossible not to draw comparisons between the author and the character.

The Bell Jar has come to symbolise teenage angst and the idea of being misunderstood but I think that it represents much more than that. It’s about the suffocating unknowing of the future, which all young people feel at some time, and it’s about the loss of identity somewhere along the way. Esther realises that she can no longer write and is no longer seen as academic – the two things which always distinguished her from others – and in the bustling city of New York amongst all the other intelligent and beautiful candidates at her placement, she comprehends suddenly and all at once just how insignificant she is. This is a feeling that undoubtedly everyone can relate to, and one which really propels the novel forward into into a myriad of doubt and mental instability.

I’m assuming that a lot of people will have read this infamous novel, but if you haven’t, I recommend that you do. It’s not cheerful or upbeat and it won’t make you feel good about yourself, but it will make you question your place in the world and make you feel just a little bit depressed. Overall, it’s a novel of sheer humanity in all of our weaknesses and insecurities and it certainly deserves to be read as a work of art. 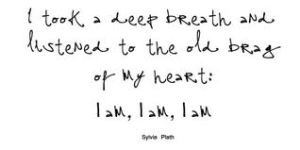 ← For What is a Fatwā ?
Why I Want to Hate the Kindle (But Secretly Want One) →
Heading back to the mountains next week with @andyfurniss4 WE CAN’T WAIT 🏔 • #Scotland #visitscotland #scottishhighlands #scottishcollective #highlandcollective
Is it the evening/weekend/summer yet? 🥱☕️ • #coffee #coffeelover #coffeetime
Weekend wanders in my fave place today ✨ • #London #mydarlinglondon #mytinyatlaslondon #bloomsbury #mylondon