Doing it for the Girls

I was watching a stupid YouTube video the other day with two guys challenging each other to archery, when one said “I’m just like Katniss”, before proceeding to fire a terrible shot.

And just like that I realised that the universal symbol for archery nowadays isn’t Robin Hood, or some superhero with amazing archery skills, but the protagonist from the recent Hunger Games trilogy. A female one at that. Obviously feisty female leads are nothing new but there’s something refreshing about the fact that millions of young people around the globe are recognising Katniss as being a viable and strong heroine, without her having to strip off too.

For too long female heroines in literature and popular culture have been ones who need to be saved by the male, and who are ultimately limited by their gender. But I remember reading the Hunger Games without being aware that Katniss was even female half the time. In my opinion, we need more heroines like Katniss: ones who the author don’t continually draw attention to the fact that they’re female. 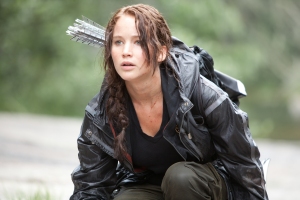 I feel like in the past few years I’ve been reading more and more literature like this. One of my favourite modern series of books is the Chaos Walking trilogy by Patrick Ness where the narrative is split between a male and female protagonist – Viola just as strong as her male counterpart. I’ve been told that Game of Thrones is full of heroines who I would appreciate but as I’m only two episodes in, I’ll have to wait and find out for myself. I have high hopes though!

Ultimately, we’re coming to a time when weak female protagonists just won’t do. Obviously, every character has flaws, but simply being a woman doesn’t need to be one. I want women who fight, beat the bad guys and who are ultimately role models for girls all over the world while showing men how it’s done.

Is that too much to ask for?