On an autumn day in 1686, eighteen-year-old Nella Oortman knocks at the door of a grand house in the wealthiest quarter of Amsterdam. She has come from the country to begin a new life as the wife of illustrious merchant trader Johannes Brandt, but instead she is met by his sharp-tongued sister, Marin. Only later does Johannes appear and present her with an extraordinary wedding gift: a cabinet-sized replica of their home. It is to be furnished by an elusive miniaturist, whose tiny creations mirror their real-life counterparts in unexpected ways . . . 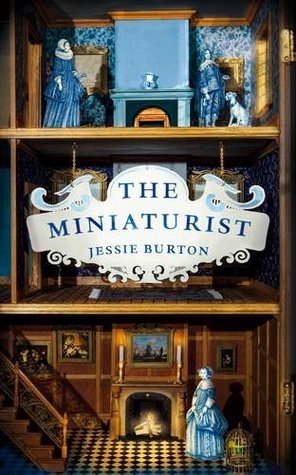 There’s really nothing worse than a book which disappoints you.

I mean, proportionately, there are many things in the world considerably worse, but it’s still pretty annoying when you invest time and energy into a book which ultimately lets you down. I read The Miniaturist because it won many awards last year, and because it truly looked like everything I could have dreamed of. Historical setting? Amsterdam in the 17th Century: check. A new and unsuited marriage? Check. Tell of a strong feminist protagonist? Check. Enough mystery and intrigue to keep you turning the pages? Check.

It’s a shame then, that I didn’t enjoy it half as much as I thought I would.

Burton’s style is easy and pretty. Her metaphors and flourishes might be a little overdone at some points, but it was overall a very pleasant read. One of my biggest irks, however, was her dialogue, which I often felt was quite jarring. I fully understand the dilemmas writers face in trying to create credible styles of speech for characters of the past, and obviously not everyone can manage to sustain such a relevant contemporary voice as Eleanor Catton did so well in The Luminaries. But I also think that it’s important to try and impart at least a little sense of realism, and I often found myself frowning at Burton’s speech as it clashed with the setting. Maybe it’s personal preference, most probably it’s me being completely picky, but it really did began to grate on me as I repeatedly threw down my book and said to myself, “But she would never really have said that!”

And I guess that the main problem, as ever, is with my expectations. The storyline just didn’t match up to what I had thought it would be, where I thought it would go, how I thought it would end. Plenty of exciting and shocking things happened, and that was great. The atmosphere and secrets shared and concealed between the inhabitants of the small Amsterdam house, and mirrored and foreshadowed by the all-knowing miniaturist, were dramatic and scandalous and fun; really everything you could expect. But I ultimately felt as if the whole thing had no closure. In fact, I didn’t even notice at first that I had finished the book and spent a good few seconds confused at why there was suddenly no more pages to read. And yes, I think perhaps I do understand what Burton was trying to say about the omniscient miniaturist, and yes, I know that not all books need to end with a clear message or a firm point, but to me it was just simply lacking something, and I was left at the end feeling a distinct lack of catharsis, and having formed emotional attachments with neither the characters nor the story.

But hey, sometimes that happens, and there’s nothing you can do about it. We can’t all like everything we read and we can’t all enjoy the books we are told are good by critics, experts, other people. Reading is something very personal. It’s about how you interact and react, and it’s first and foremost about your own interpretation.

And so then, am I the only one to feel this way? Many other reviews I’ve read have been overall very positive and I’d love to hear if anybody else agrees with me. Let me know in the comments!

← Lost in Leipzig
Poetry Corner: Let’s Talk About the Fear →