Becoming Jane: the Good, the Bad, and the Beautiful

I’ve seen Becoming Jane a couple of times and while I always enjoy it, there are still a couple of things which annoy me about it. Consequently, here’s the good (links to her books), the bad (Anne Hathaway’s accent) and the beautiful (James McAvoy).

Firstly, I think my main quibble with the film, is that there are a lot of un-Austen like social moments, and being such a fan of the books I can’t imagine that Austen would agree with them either. I understand that the film was trying at some points to portray a different side to the rigid society which Austen navigates so well, and obviously life for the country gentry was very different to life for those in the city. Nevertheless, when I see Jane crouching on the floor after Tom is knocked out in a public brawl and them having an openly intimate moment, my insides scream at me that this is not right. Now I’m no Regency etiquette specialist, but I’m pretty sure that any respectable lady would never behave like that, least of all the woman who writes with such an awareness of social standards. On the other hand, because her novels show so little physical emotion or even often omit a kiss or the words ‘I love you’ from the most romantic of moments, (which we can only assume would have taken place) I might have found the sudden depiction of lots of emotion a bit unsettling. 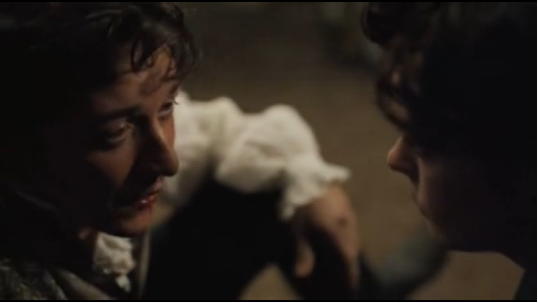 Would an honourable woman act like this? Not sure I mind any more, it’s very cute.

Secondly, why do directors keep insisting in casting Anne Hathaway in British roles when she clearly hasn’t mastered the accent? Whether it was her questionable one here or her dire Yorkshire/American/alien one in One Day, every now and again I can just pick up a strange lilt in her voice and then I’m too annoyed to concentrate. Also, Jane Austen is a famously average-looking woman and although I think Anne Hathaway is a great actress, she is far too beautiful to play Plain Jane.

I don’t see that much resemblance.

Yet asides from my moaning, I really do enjoy the film as a whole, especially James McAvoy who I absolutely love (Atonement anybody?). I think it’s so cute that he had to wear stilts in every scene with Anne because he’s so short and the sexual tension between them was great. The music, the locations and the costumes were also all well done, and I’ve just discovered that many of the dresses were the same as those worn in Pride and Prejudice, or other Austen adaptations. Linking her life to her work was well done too; I think you can really tell that many of her characters and events were based on personal experience or people she knew and it was nice to see her inspiration for some of her most well-loved scenes and characters.

Anyone who knows me knows that I don’t have the greatest taste in films and usually enjoy the cheesiest/rubbishest of movies, so I’m happy that I’ve managed to produce some (sort of) rational criticism here. Also, Maggie Smith klaxon – I very much enjoyed her playing such a similar role to that of the Dowager in Downton. Overall I’d recommend it to anyone who loves a bit of Austen, but be prepared for some artistic license to be taken, as you’d very much expect.