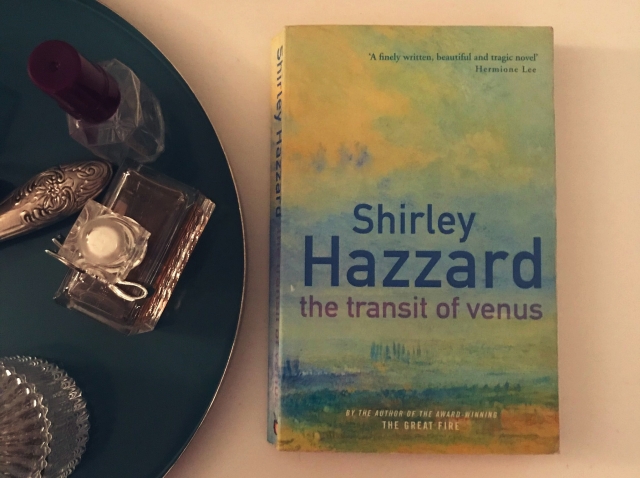 Caro, gallant and adventurous, is one of two Australian sisters who have come to post-war England to seek their fortunes. Courted long and hopelessly by young scientist, Ted Tice, she is to find that love brings passion, sorrow, betrayal and finally hope. The milder Grace seeks fulfilment in an apparently happy marriage. But as the decades pass and the characters weave in and out of each other’s lives, love, death and two slow-burning secrets wait in ambush for them

The Transit of Venus is having something of a comeback. Originally written in 1980, it won the National Book Critics Circle Award in the same year, and seems to have becomes one of those novels that has come back around, with women in particular finding themselves looking at Hazzard’s book in new light.

I read The Transit of Venus as part of my Masters course, looking in particular at works of fiction from the perspective of writers. I have to say that I found reading The Transit of Venus difficult and time-consuming to read, but as a writer I can see that it’s so masterful and unique in its use of foreshadowing and subtlety. It’s so subtle, in fact, I totally missed the ending and had to have someone to explain it to me! Fans seem to be split into two camps: those who wish they could read it again for the first time, and those who agree you have to read it twice to really get it. I feel like I would definitely need to go back and pick up on all the subtle hints that Hazzard scatters throughout the book.

The Transit of Venus is ultimately about love – in its many layered and complicated forms. I can’t say I particularly liked protagonist Caro, but I followed her story and love affairs with interest, understanding that the coincidences and events that take place are part of Hazzard’s greater plan of showing the predetermination and inevitability of our lives. The title of the book gives away what Hazzard is trying to say: our fates are written in the stars. The many insights into other characters’ lives and love affairs adds to this idea of the complicated ways in which human lives interweave.

I think I need to read The Transit of Venus again in order to fully appreciate its power and intelligence. I fear it might be one of those novels that requires explaining to be fully appreciated because it operates on such a higher level. But invest some time and energy in the book, and I’m sure that it will be worth it.