Why we all love Austen

I haven’t done a literary blog post in a while so I thought I’d take the time to dedicate one to the goddess of all authors: Jane Austen. She’s been an inspiration to so many, and her books are just perfection. Obviously we all love her, but here’s why:

The fact that the mere name ‘Mr Darcy’ causes a swoon in many a woman (probably something to do with Colin Firth rising out of a lake with his wet shirt clinging to his torso…) clearly shows Austen’s success. Her heroes aren’t just men. They’re gentlemen. And we all fancy them.

I know everyone goes on about the original BBC adaptation, but the Joe Wright Pride and Prejudice film with Keira Knightley is literally my favourite film ever. The music, the camera angles, Matthew Macfadyen…SO GOOD. And I love all the adaptations – the Billie Piper Mansfield Park one, the ITV Emma one with Romola Garai, the Northanger Abbey one, I could go on. The only thing better than reading Austen is watching it. (I also quite enjoyed Becoming Jane despite Anne Hathaway’s questionable accent and the over dramatised storyline, but that probably only had something to do with James McAvoy.)

3. Situations we can all relate to

Love triangles, embarrassing parents, thinking we hate someone but actually liking them, not realising that you like someone you’re close to, gross misunderstandings: if you think about it, Austen’s characters are just us now transplanted a couple of centuries ago. Obviously the context is different and the characters are governed by a set of social rules completely different to ours, but I really believe that everyone can find something to relate to in her work and that’s why it’s still so relevant today. It’s something of a combination between this relevance and the fact that it’s so set in its time which endears it to us so much.

The desperation of her heroines not to end up as old spinsters is far more significant when read in the context of Austen’s own bad luck in love and it gives her books a poignant feeling which I think we all appreciate. Poor old Jane, we love you all the more for it.

Clearly I’m something of an Austen fan, and I’m enjoying currently reading Persuasion, the last of her books for me to read. I know that there are millions more of you out there like myself (particularly Americans, apparently they love it) and I’d love to hear your thoughts. 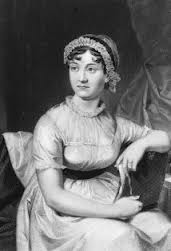 Plain Jane: if only you knew how much we still love you